Three Managers and a Work Plan 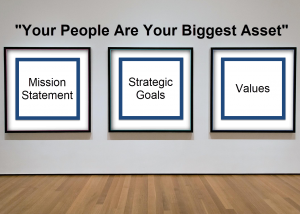 Once upon a time, there was an organization.  It was a big organization.  Many people worked there.  The executives of this organization were smart.  They read books, attended conferences, and listened closely to wise consultants. They had their own good ideas, too.

The consultants told them of the future.  A future of more profits and more success–if they would only manage work and people more wisely.  The words were consistent.  “Your people are your biggest asset”.  And the executives believed.

Consultants were asked to help, at great expense.  They interviewed the executives.  A ‘Mission Statement’ was drafted.  ‘Strategic Goals’ were established.  ‘Value’ statements were created, framed and hung on walls throughout the big organization.  These statements described the importance of ‘Customer Service’, ‘Employee Development’, and ‘Creating Shareholder Value’.  Managers and employees in the big organization were asked to believe, and to help.

But the executives had questions.  Their questions demonstrated great wisdom. “How can we engage our people to help us grow profitably, year after year?” they asked.

The answer from the consultants was clear and consistent.  “Develop work plans that hold people accountable…”.  “Recognize and reward people for the achievement of their work plans…”.  And the executives believed.

Much time, effort and expense went into developing and implementing ‘work plans’.  Consultants helped create information packages around the new ‘work plan’ initiatives.  Management was trained.  Employees were educated.  They learned why ‘work plans’ were important.  They understood how ‘work plan’ achievements would be recognized and rewarded.  And everyone believed.

Time went on.  ‘Work plans’ became part of the big organization’s culture.  It was different, and it helped give focus to what work was getting done. True to their word, the executives recognized, rewarded and promoted people who achieved their work plans.  The process seemed to be working.   Productivity and profitability improved.  For a while.  Then it slowed.

The executives became concerned.  Employee morale and work engagement sank.  Staff turnover increased. The executives turned to the consultants with more questions. “What is happening?” they asked.  So the consultants conducted compensation surveys.  They consulted with other consultants.  They interviewed management personnel and employees. They offered up their answers. “Retaining staff is an industry wide problem…”  “You need to re-structure…”   “You need to pay more money for the ‘in-demand’ skills…”.  The executives believed, and they acted.

Morale and engagement did not greatly improve.  Turnover was still too high.  Frustration and confusion reigned. “We need better measures of what is going on!” said the executives.  More consultants were brought in to help.  More money was spent.  Employee attitude surveys were conducted.  The consultants analyzed the results. Recommendations were made and implemented.  They coached, and they trained.  Still, things were not good at the big organization.

During this time there were three managers that worked in the organization.  They knew each other by reputation only.  All three believed in the value of ‘work plans’.  But they did their jobs quite differently.

One manager, Sam, was politically astute. He made sure that his work plans were achieved every year.  He made sure that the work plans of his subordinates were achieved, too.  Sometimes it was necessary to discipline people for not achieving their work plan.  Sometimes he even let employees go when they “under performed” according to his measures.  This made him feel bad for a while.  So, he learned how to make work plans just a little less challenging to help ensure they could always get done.  And very well done, as a matter of fact.

Sam spent time getting to know and be known by senior management.  Life was good.  His team looked good.  They achieved their work plans, and they were rewarded well.

Sally and her team were very well recognized and rewarded by the executive. Life was very good.  Sally got promotions and progressively larger management responsibilities. She didn’t stay very long in any particular job. Her staff did very well too.  They spread out and moved up in the big organization, and Sally’s style was cloned because that was clearly a successful style.

The third manager, Sue, had a more measured approach.  Her leadership style was quite different than Sam and Sally.  Sue certainly knew work plans were important to measure what got done. But for her, it was just as important to recognize how the job got done.  She believed in the Mission Statement. She believed in the Strategic Goals.  And, she believed the Values that hung on the walls throughout the big organization.  She held her employees accountable for believing and demonstrating them, too.

Sue developed Job Descriptions with these Values in mind.  She believed in hiring and promoting people if they had the required experience and skills and past proven ability to demonstrate the organization’s Values.  She managed people according to their assigned work plan and the behaviors and values they demonstrated on the job.  Sue sponsored training opportunities for her staff–but only if the training was job specific and relevant to the big organization’s Values and Goals.  Sue also asked others to participate in learning and growth appraisals, both from inside and outside the organization.  For her, and for her staff.

Sue wanted to make sure that in everything she did, respect was consistently demonstrated.  Towards the organization, her boss, her peers, her staff, and her customers.   Sue recognized that lasting and true change in productivity and profitability was a journey that didn’t have a specific arrival date. And, that it would not be driven by focusing only on work plan accomplishments.

Sue was soon attracting and retaining staff better than any other manager. In fact, people asked to work for her. She had staff who were motivated by their work.  They believed in her leadership because she had first demonstrated belief in them. Sue showed fairness, appreciation, respect, and recognition for the things that didn’t always show up in an employee’s work plan. That was unusual.   Sue proved the truth and wisdom in the saying “money is not the only reason people stay with an organization”.

Some days, it was hard for Sue to keep true to her convictions about what was really important.  It was particularly hard on those days when Sam and Sally had a very high profile with the executives. But she knew she was right, and she stayed the course.

Over time, the executives began to recognize that reward and recognition programs based on achieving work plans was having only mixed results. People promoted from Sam’s group, who completed less-than-challenging work plans, were showing less-than-impressive operational results. One astute executive asked, “Who is ensuring that our work plans and learning and growth expectations – across all organizational units – are consistently challenging and appropriate for what we are paying people to do?”  There was no answer to the question.

Over time, it became clear that promoting people because they completed work plans at any cost had been a very expensive mistake too. The executives began to recognize what employees had learned much earlier – that the framed ‘Values’ statement on the walls of the organization meant very little.  Being “just like Sally” was what really mattered.

The executives took the time to find out why Sue was being so successful.  They recognized that consistently demonstrating respect, integrity and organizational values in every interaction involving employees was critical to long-term productivity and profitability. The executives learned that employee ‘feelings’ about their manager and the big organization directly correlated with customer satisfaction…

Employees came to understand that what they did – and how they did it – mattered. Managers found they were consistently becoming better managers because measures were prescribed.  Executives confirmed that their organizational values were the right ones to provide a competitive advantage in the marketplace.  And all it took was ensuring they were consistently being demonstrated by their staff.

Staff turnover dropped like a rock. Morale and engagement skyrocketed.

Customers noticed.  Productivity and profitability returned — to stay. All came to know that how the job was done was just as important as what was done.

As the organization became known far and wide as a great place to work, executives came to realize that the best ideas for their business had always been within them.

And the consultants?…  The executive encouraged them to work with the organization’s competitors.

Please give us a call.  Our team at Encompassing Visions would love to show you how we manage it – successfully.

This site uses Akismet to reduce spam. Learn how your comment data is processed.